Every Engine Oil Fact You Need To Know

Every good car owner knows that keeping the engine in top shape is essential for the proper functioning of their vehicle. In order for this to happen, one must consider every single item that goes into their engine and makes it work as well as it should, engine oil being one of them, hence the reason why we’ve decided to make this guide discussing every engine oil fact you need to know.

Think of engine oil as the lifeblood of your engine, without it your engine simply isn’t capable of working and something as innocent as putting the wrong kind of oil, or simply not changing it when you’re supposed to, can lead to major issues and expenses. Avoid turning your engine into a wreck by considering each one of these engine oil facts. 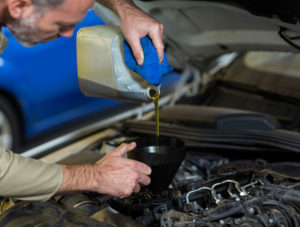 Engine Oil Fact #1: Why Engine Oil Is So Important To Your Engine

Your engine is made up of metallic moving parts that can easily heat up because of friction, so engine oil’s main job is to lubricate those parts and prevent friction from happening. When friction is involved heat is also present and if your engine happens to heat up more than it should because of a lack of engine oil or the wrong viscosity of oil you could easily end up causing internal engine damage.

Preventing friction between said moving parts keeps them from grinding against each other and causing damage which could easily end up in you needing to replace the engine, one of the costliest repairs you can find yourself immersed in.

While this is the most important engine oil fact you need to know, there’s plenty of other reasons why this component is so important for the health of your engine.

Since the engine works by producing highly controlled combustion inside its cylinders, engine oil prevents this combustion from getting too hot and potentially damaging the engine. Acting as a main insulator, oil prevents the heat generated by all of these metallic parts to affect the combustion cycle.

Part of the working process in the engine involves fuel entering it from the fuel injection system, or carburetor in the case of older vehicles. This fuel is composed of chemicals that, when ignited, produce several byproducts, such as acids and silicon oxides. This viscous and slick fluid makes the engine oil act as a magnet for these byproducts, preventing them from entering other vital parts of the engine in which they could cause damage.

In order to generate, combustion, fuel has to be mixed with air, air contains oxygen and oxygen accelerates oxidation processes, which are minimized thanks to the right engine oil, preventing corrosion from forming into the engine and affecting its functioning negatively.

Engine Oil Fact #5: Quality of your engine oil matters, but so does its grade 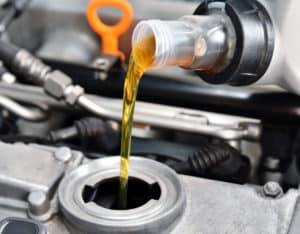 When purchasing engine oil you must have looked at its SAE Rating, but what exactly does that rating mean? SAE stands for Society of Automotive Engineers and the rating it gives refers to the function and viscosity of any given oil.

Viscosity refers to the thinness or thickness of the oil. When your car is functioning in cold weather, the engine oil should be able to stay as thin or as low viscosity as possible in order to flow better through your engine and not turn solid the way oils do when exposed to colder temperatures. When it’s hot however, engine oil should be much thicker or have a higher viscosity.

SAE Ratings are there to signal the viscosity of the oil under hot or cold temperatures, for example, a fully synthetic oil signaling an SAE Rating of 5W-30 means that it’s been tested at lower temperatures having a viscosity level of 5, with the “W” referring to Winter, while the number 30 signals the viscosity grade of the oil when the engine is at a 212ºF temperature.

If your car is being exposed continuously to a colder environment, the 5W engine oil will circulate through the engine much faster than a 10W will. The quicker the oil flows through your engine, the shorter the time it will spend dry running, and a reduction in dry running means less engine wear.

While your engine can run without engine oil, automotive tests have shown that after doing so for about 15 minutes the engine starts breaking apart, therefore in order to keep it functioning to 100% of its capabilities you should always look for an engine oil that flows quicker through your engine, especially under cold weather.

There are three different types of motor oil out in the market, fully synthetic, semi-synthetic and regular oils. The main difference between them is their capacity to protect your engine and its components.

The reason why fully synthetic oils can be much more expensive than the rest is because they’re specifically developed in a laboratory in order to provide maximum power and optimum performance from your engine. These types of oils provide a greater fuel efficiency, which translates into better gas mileage and a better protection against wear and buildup of mineral deposits. You can recognize them as showing SAE Ratings of 0W-20, 0W-40 or 5W-40.

Even in colder temperatures a fully synthetic oil will be able to maintain its viscosity grade and circulate faster through your engine, keeping all of its mechanical parts running in no time at all. Using this type of oil means you won’t need to change it as frequently as you would a regular oil, being able to work for an average of 5000 miles to 10,000 miles, whereas regular oil should be changed after 3,000 miles.

A semi-synthetic oil on the other hand is a blend between regular motor oil and fully synthetic. They come with SAE Ratings around 5W-30, 10W-40 or 15W-40. This type of engine oil will be less expensive but still able to reduce engine wear about three times better than conventional oils would, needing less change and providing an optimal protection within 10 minutes of starting the engine.

At last, there is conventional oil which is the least expensive and oldest of them all, coming with SAE Ratings around 10W-40 and 15W-40. This kind of motor oil provides the most basic protection to your engine, requiring more frequent changes and being a better fit for older cars with a simpler engine design that do not run on especially cold or hot temperatures, since it is not adapted to winter nor extreme heat.

A frequently asked question regarding motor oil is whether or not a diesel rated oil can be used on petrol (gasoline) engines. The answer is most likely a no. Why? Diesel oil contains in its composition anti-foaming agents, additives and detergents that are unique for diesel engines and can actually damage petrol ones.

However, many modern car engine oils are now made to comply with all of the requirements of both petrol and diesel engines, so if you are careful enough to choose the right diesel oil specification equivalent to its gas counterpart there shouldn’t be a problem.

The shelf life of engine oil is around 4 to 5 years, however, unused oil can become obsolete and fail to meet the technological requirements of current engines. Since these requirements are continuously changing and evolving, old engine oils may not fit with the current ones, meaning that if you have a bottle of unused oil from your old car laying around it’s not wise to put it into your newer vehicle.

Now that you know all of these facts about engine oil you are prepared to care for your car’s motor system properly. Remember, engine oil is an essential factor in your vehicle’s optimal performance so be careful to choose the right one every time.